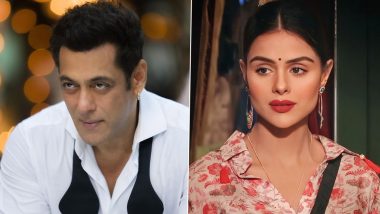 Mumbai, January 22: Reality shows can help in making a career. This is true for ‘Bigg Boss 16’ contestant Priyanka Chahar Chowdhary as superstar Salman Khan has expressed his desire to work with her. In the latest episode of the controversial show, Salman shared that Priyanka is heroine material and he might work with her in future.

Salman also got former contestant Sajid Khan to praise Priyanka as Sajid and Abdul were present on the show at that time. Contestant Nimrit Kaur Ahluwalia has also got a film after being a part of the controversial reality show. Nimrit has been signed for the sequel of Ekta Kapoor’s 2010 film ‘Love Sex Aur Dhokha’. Also read: Shanaya Kapoor gave sexy poses on the bed wearing a hot red bodycon dress, the charming looks of the upcoming actress won the hearts of the fans (View Pics)