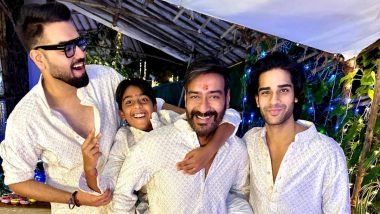 Mumbai, January 8: Aman Devgan, nephew of Bollywood actor Ajay Devgan, is all set to make his Bollywood debut with an action film directed by Abhishek Kapoor. According to media reports, Abhishek Kapoor will launch Aman in his film. The shooting of this untitled project will start soon.

A source from the production house told Pinkvilla, “Abhishek Kapoor has been keen to explore the action-adventure space for a while now and his next story will feature him as a director. He is very excited to take the film forward . He will launch Aman Devgan in this film. The film will be produced by Pragya Kapoor along with Ronnie Screwvala.” According to reports, Abhishek needed fresh and established faces and hence thought of Ajay and Aman. Also read: Mallika Sherawat Sherawat wore a hot bikini and struck lightning in the cold weather, seeing the boldness of the actress, the users went crazy (See Pics)

Sources have said, “It is a massive action adventure and the team is planning to create a definite world for the film. The characters will be presented in a certain way in this unique world of adventure created by Abhishek. The untitled film is all set to go on floors in the next few months.” Talking about the workfront, Abhishek is known for his films like ‘Rock On’, ‘Kai Po Che’, ‘Fitoor’, ‘Chandigarh Kare Aashiqui’, ‘Kedarnath’.