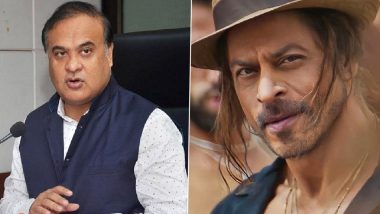 Himanta Biswa Sarma wrote in the tweet, Bollywood actor Mr. Shah Rukh Khan called me and we talked at 2 am today. He expressed concern over an incident that took place in Guwahati during the screening of his film. I assured them that it is the duty of the state government to maintain law and order. We will inquire and ensure that no such untoward incident happens.

Bollywood actor Shree @iamsrk called me and we talked today morning at 2 am. He expressed concern about an incident in Guwahati during screening of his film. I assured him that it’s the duty of the state government to maintain law & order. We’ll inquire and ensure no such untoward incidents.

Shahrukh Khan is returning to the big screen after 4 years. His fans are eagerly waiting for Pathan. Advance booking of movie tickets is also going to please King Khan and YRF. Apart from Shah Rukh, Deepika Padukone and John Abraham are also in lead roles in the action packed film Pathan directed by Siddharth Anand. John has played the role of Villain in this film. The film will be released in theaters on January 25. Big disclosure of Shahrukh Khan, wanted to become an action hero 32 years ago, the ‘King of Romance’