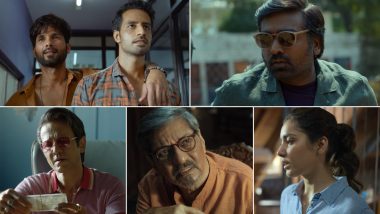 Farzi Official Trailer Out: Money cannot buy happiness, only those people kill these dialogues, who do not have money at all. We are not saying this. Shahid Kapoor is saying this. Prime Video today released the trailer of its upcoming Indian Amazon Original Series Farzi. Superstar Shahid Kapoor and ‘Makkal Selvan’, Vijay Sethupathi are going to make their digital debut through this crime drama.

The trailer gives a glimpse into the life of a swindler-turned-con artist Sunny aka Shahid Kapoor, who finds himself in the dark even while pulling off a perfect con. However, Vijay Sethupathi, a flamboyant and unorthodox task force officer, has made it his mission to rid the country of the threat he poses. Spread over eight episodes, Fergie is a fast-paced, intense and one-of-a-kind crime thriller, featuring the director duo’s trademark humour, that centers around a clever underdog street artist’s quest to win over a system that favors the rich. is built around. Watch the official trailer of Farzi:

Apart from Shahid and Vijay in this series, K. Of. Menon, Raashi Khanna, Bhuvan Arora, Regina Cassandra and Amol Palekar are in lead roles. Produced by D2R Films and directed by Raj & DK, Farzi will premiere on Prime Video on 10 February.