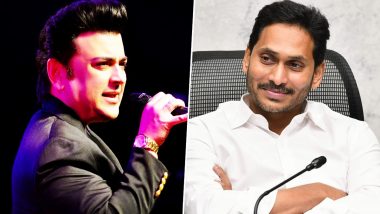 Golden Globes 2023: The song Naatu Naatu from SS Rajamouli’s film RRR has received the honor of the Golden Award, which is being discussed all over. People on social media are not tired of congratulating the team of RRR, but in the meantime what happened that singer Adnan Sami did not like the congratulation given to the RRR team by Andhra Pradesh Chief Minister Jagan Mohan Reddy. So let’s go to Jagan Mohan first. Let’s see Reddy’s tweet. Adnan Sami got agitated after reading this. Golden Globe Awards 2023: Golden Globe Award winning Naatu Naatu song was shot in Ukrainian presidential palace, took 20 days with 43 takes

Chief Minister Jagan Mohan Reddy tweeted congratulating and wrote, Telugu flag is flying high. On behalf of the whole of Andhra Pradesh, I am M.M. Congratulations to Keeravani, SS Rajamouli, Jr. NTR, Ram Charan Teja and the entire team of RR film. We are proud of you’

Telugu flag? You mean Indian flag right? We are Indians first & so kindly stop separating yourself from the rest of the country…Especially internationally, we are one country!

This ‘separatist’ attitude is highly unhealthy as we saw in 1947!!!

Now Adnan Sami has retaliated on this tweet. He wrote, Telugu flag? You mean the Indian flag right? We are Indians first and so please stop separating ourselves from the rest of the country…especially internationally, we are one country. This isolationist attitude is extremely unhealthy as we saw in 1947. Thank you…Jai Hind!

From Adnan Sami’s tweet, you must have understood what he wanted to say. In fact, what Adnan Sami has said, SSS Rajamouli and his team have also said that this is not only the victory of RRR, but the victory of the entire Indian cinema. What is your opinion about this? You can share your views on the comment box. Naatu Naatu Wins Golden Globe: This is not just a victory for RRR, but for the entire Indian cinema: SS Rajamouli