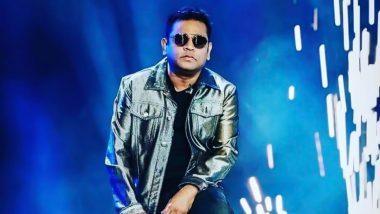 Mumbai, January 11: Composer AR Rahman was the first Indian to win the Golden Globe in the Best Score category for the 2009 film ‘Slumdog Millionaire’. He congratulated the team of ‘RRR’ for bringing the 80th Golden Globe Award for the song ‘Naatu Naatu’. Sharing a clip of Jenna Ortega on Instagram, Rahman announced ‘Naatu Naatu’ as the winner in the Best Original Song from a Motion Picture category. He tweeted, “Congratulations Keeravani Garu on behalf of all Indians and your fans! Congratulations Rajamouli Garu and the entire RRR team!”

Accepting the award, he said, “Thank you very much for this prestigious award. This award is given to SS Rajamouli for his vision, I thank him for constantly believing and supporting my work. NT Rama Rao and Ram Charan who danced with all their might.” ‘RRR’ stars NTR Jr, Ram Charan, Ajay Devgan, Alia Bhatt, Shriya Saran, Samuthirakani, Ray Stevenson, Alison Doody and Olivia Morris.