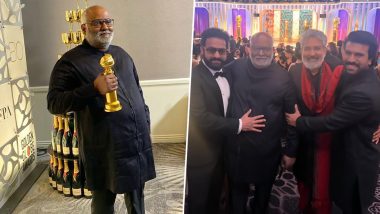 He said, “While accepting the award, it has been an old practice to tell someone else who deserves it. I thought that when I get the award, I will not do it but I am sorry that I am going to repeat the same practice because I really believe in it. s. Dedicated to Rajamouli’s perspective. I thank you for your continued trust and support in my work. Also read: Shefali Jariwala Hot Photos: ‘Kanta Laga’ girl Shefali Jariwala showed hot personality by wearing a black bikini

The composer also thanked choreographer Prem Rakshit, lyricist Chandrabose and singers Sipligunj and Bhairav. Actor N. He also thanked T. Rama Rao Jr. and Ram Charan for dancing with full enthusiasm in the song. RRR is a fictional story of Indian revolutionaries. Ram Charan and Junior NTR are in important roles in the film. The film is set in the 1920s when India was under British rule. Alia Bhatt and Ajay Devgan were also in the film.