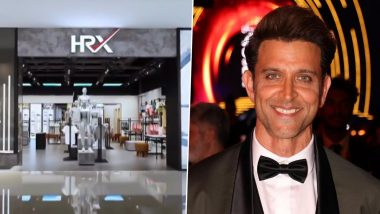 Hrithik Roshan Birthday: Hrithik Roshan Azad is celebrating his 49th birthday. On this special occasion, he has given a special gift to his loved ones. Hrithik has shared the video of his HRX showroom in Bangalore. Yes, Hrithik is now going to move from digital to reality. He is going to open a showroom of his clothing brand HRX in Bangalore. He is going to inaugurate it on January 19.

Hrithik wrote in the caption, From digital to reality .. Dreams do come true! See you in the first ever HRX store, Bengaluru! Congratulations to my incredible HRX team on this new milestone. Can’t wait to be there in person! what fun. Hrithik Roshan Turns 49: Ex-wife Sussanne Khan and actor’s girlfriend Saba Azad shared beautiful pictures and videos wishing Hrithik Roshan a happy birthday (Watch Video)

Talking about the workfront, Hrithik Roshan was last seen in the film Vikram Vedha. Released on September 30, this film was a remake of South’s film Vikram Vedha. Saif Ali Khan also appeared in the lead role along with Hrithik in this film. The film could not entertain the audience much. Now Hrithik’s upcoming film is Fighter, in which his opposite Deepika Padukone will be seen. Siddharth Anand is directing this film.