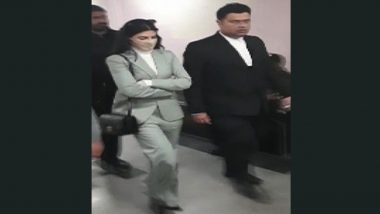 New Delhi, January 19: Actress Jacqueline Fernandez on Wednesday told a Delhi court in the Rs 200 crore extortion case involving Sukesh Chandrasekhar that Chandrasekhar played with her emotions and made her life a “hell”. In the ongoing case in the Patiala House court, the actress claimed that Sukesh’s aide Pinky Irani introduced herself as ‘a government official’ and told him that she was taking him for a ride in a car.

According to Jacqueline’s statement, Sukesh had introduced himself as the owner of Sun TV and claimed that (late Tamil Nadu Chief Minister) J. Jayalalithaa was his maternal aunt. Jacqueline said, “Sukesh told me that he is his big fan and I should do films in South India as well. He has many projects as the owner of Sun TV. He said, we should work together in South Indian films. Must try.” He said, “Sukesh misled me, ruined my career and my livelihood.” Jacqueline said that she later came to know that she was arrested for posing as senior officials of the home and law ministries. Also read: Shahrukh Khan’s big disclosure, wanted to become an action hero 32 years ago, ‘King of Romance’

He claimed that he came to know about Sukesh’s real name when he was told about his criminal background. The actress said that she was cheated by Pinky Irani. He never disclosed Sukesh’s background. He said, “Pinky Irani was aware of Chandrashekhar’s activities and background. But she never told me about it.”

The same court had on January 16 issued notice to the Enforcement Directorate (ED) on an application filed by the actress seeking permission to travel to Dubai after January 27 for professional work. He had requested for an urgent hearing on the application, so the court fixed the matter for next hearing on January 25. Jacqueline had sought permission to go abroad in December last year to meet her ailing mother in Bahrain. However, he withdrew it as the court was not ready to allow him to travel abroad.

Chandrasekhar is allegedly accused of extorting money from politicians, celebrities and businessmen. He duped Aditi Singh, wife of former pharma company Ranbaxy owner Shivinder Mohan Singh, of Rs 200 crore. He allegedly sent very expensive gifts to Jacqueline, while he also booked a chartered flight from Mumbai to Chennai for her during her bail period. According to the ED, it is suspected that the alleged swindler sent a major part of the extortion money from Singh to Jacqueline.