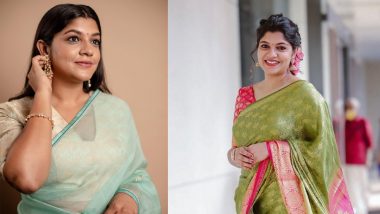 Kochi, January 20: A student of Enarkulam Law College has been suspended for a week for misbehaving with actress Aparna Balamurali. According to reports, the law student misbehaved with National Award-winning actress Aparna Balamurali when she had reached the campus to promote her upcoming film. Avneet Kaur Hot Photos: TV actress Avneet Kaur showed bold avatar wearing sexy swimsuit, fans were also stunned

According to reports, during a function organized for the promotion of the film ‘Thankam’ in the college campus earlier this week, Vishnu, a second-year student, suddenly appeared on the stage and gave a flower to actress Aparna, who was sitting there. During this, the student shook hands with the actress before forcefully lifting her and put his hand on her shoulder for the picture. On this action of the student, an official on the stage said sorry to him, but the student again wanted to shake hands with the actress, but she refused.

It is seen in the viral video that the actress is trying to get away from the student. After the video went viral, the Ernakulam Law College Union apologized for the student’s behavior but suspended the student from the college for a week on Friday as the matter escalated.