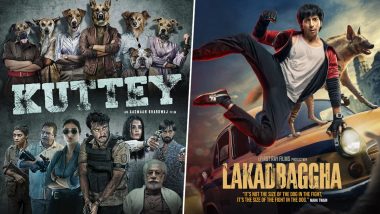 Movies Releasing On This Friday: Arjun Kapoor and Tabu starrer film Dog and Anshuman Jha and Riddhi Dogra starrer film Hyena is ready for release on the big screen this Friday, 13 January. The genre of both these films is different, due to which it can be expected that these films can get an audience. But the journey is not going to be that easy either. Because last year, big budget films like Akshay Kumar starrer Samrat Prithviraj, Hrithik Roshan and Saif Ali Khan starrer Vikram Vedha and Aamir Khan starrer Lal Singh Chaddha have been seen biting the dust. But this year proved to be very good for South films. Films like RRR to Pushpa, KGF 2 and Kantara created panic. Trailer of Arjun Kapoor-Tabu starrer dark humor film ‘Kutte’ surfaced, film to release on January 13

Arjun Kapoor and Tabu will be seen in the role of police in the film Kutte directed by Aasman Bhardwaj. The trailer of the film is full of dark humour. Apart from Arjun and Tabu, Naseeruddin Shah, Konkona Sensharma, Kumud Mishra, Radhika Madan and Shardul Bhardwaj will be seen in the lead roles in the film. The film will be released in theaters on 13 January.

The film Lakdbagga is based on the story of a superhero who is an animal lover and teaches a lesson to those who harm them. Directed by Victor Mukherjee, Anshuman Jha is in the lead role in this film. Ridhi Dogra Dogra will be seen opposite him. Along with this, Paresh Pahuja and Milind Soman will also be seen in lead roles. The film is releasing in theaters on January 13.