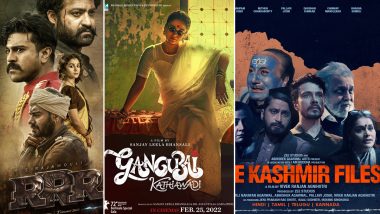 Los Angeles (USA), January 10: The Academy of Motion Picture Arts and Sciences (AMPAS) has released a list of 301 feature films eligible for Oscars, which include Indian films like ‘RRR’, ‘Gangubai Kathiawadi’, ‘The Kashmir Files’ and ‘Kantara’. The ‘Reminder’ list includes films that will officially compete against other films in various categories. However, just being on the list does not guarantee that the film will make it to the final nominations for the Academy Awards to be announced on January 24.