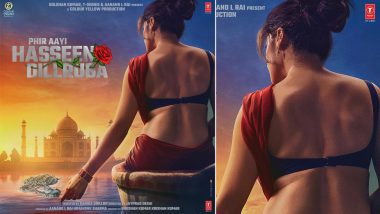 Phir Aayi Hasseen Dilruba: The first look poster of Taapsee Pannu’s film Phir Aayee Haseen Dilruba has been released. This film is a sequel to Haseen Dilruba. Like before, Vikrat Massey will also be seen in the lead role in the film. The poster of the film is very interesting. Safi, sitting near the Taj Mahal, is seen in a very sexy look. A crocodile is also visible near him.

Taapsee’s sensuous look in this poster has raised the excitement among the fans, making them guess what the story is going to be? The symbol of love is Taj Mahal in the background and the actress is looking very beautiful. View poster:

Color Yellow Productions marks the third collaboration between Taapsee Pannu, co-producer and writer Kanika Dhillon after the super success of Manmarziyaan and Haseen Dilruba. This creative trio is surely here to deliver stories that keep the audience hooked till the very end and now the trio has been joined by producer Bhushan Kumar.