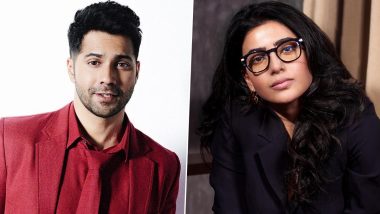 Varun Dhawan supports Samantha Ruth Prabhu: Recently Samantha Ruth Prabhu has faced trollers on social media. Varun Dhawan has been seen standing with Samantha and has given a befitting reply to the trollers. Varun wrote in his tweet, you don’t care about anything, you just mean to attract people’s attention, I feel bad for you son. Glow is also found in the filters of Instagram. I met Sam recently, believe me she was shining. Shaakuntalam Hindi Trailer: Samantha – Dev Mohan starrer Shakuntalam’s explosive trailer released, this period drama film will be released in theaters in 3D on February 17 (Watch Video)

Commenting on Samantha’s looks, a user said, feeling bad for Samantha, she has lost her charm and glow. When everyone thought she had recovered strongly from the divorce and was on a high in her professional life, myositis broke her down, leaving her vulnerable again.

U don’t feel bad abt anything u just care about clickbait feel bad for u son. Also glow is available in instagram filters. Jsut meet Sam trust me she was glowing. 🙏 https://t.co/JRslCKYJpP

Let us tell you that South Sensation Samantha had revealed her illness last year and told that she is suffering from a disease called myositis. Recently, Samantha came in front of the media during the trailer launch of her upcoming film Shakuntalam. KGF Chapter 3 Update: KGF producer shared the update of Chapter 3, said – Hero will keep changing in the sequel