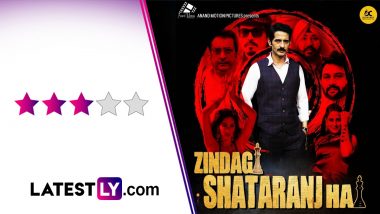 acting: Actor Hiten Tejwani is a very experienced and seasoned actor, who is seen in the role of first disguised Vishal Malhotra and then as an officer Siddharth, impressing the audience with his acting from beginning to end. Pankaj Beri in the role of Dr. Shah Jamte Hemant Pandey in the role of Vasu plays both the comedy and suspense side very easily in the film Two songs in the film respectively Daler Mehndi’s guest appearance in Ghadal Gadbad and Bruna in Badnaam Na Kar Dena Loved Abdullah’s performance, Daler Mehndi is seen performing on a film song after a long time.

Final Take: Director Dushyant Pratap Singh presents the story of the film with tremendous suspense and thrill. At one point it seems that Kavita is really unable to recognize her husband due to her illness, but after a short gap in the film Such incidents keep happening which shows that everything is not as it seems. All the characters of the film seem to be part of a conspiracy, this is the beauty of this story because when the truth behind all these incidents comes to the fore, it is the most shocking. The directors manage to show suspense and thrill on screen with a neat presentation.