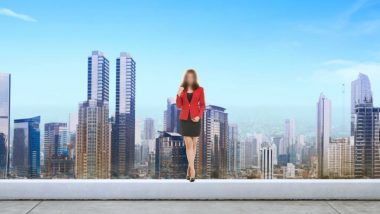 Air Hostess Committed Suicide, West Bengal: 27-year-old air hostess Debopriya Biswas jumped from the terrace of her sister’s house in Kolkata yesterday. He was immediately taken to SSKM Medical College and Hospital, where he succumbed to his injuries.

An air hostess from Kolkata committed suicide on Saturday by jumping from the fourth floor of a building due to lack of employment, police said. Biswas was a resident of Metropolitan Co-operative Housing Society of Pragati Maidan police station area of ​​Kolkata. read this also- UP Shocker: Woman strangulates sleeping step daughter Rashmi at home

Police said, at around 4 pm on Saturday, he tried to commit suicide by jumping from the four-storey building where his sister lived. She fell on the road in front of the house and was seriously injured. He was taken to SSKM Medical College and Hospital, where doctors started his treatment, but he died shortly after.

Kolkata, West Bengal | One 27-year-old Debopriya Biswas, an air hostess by profession, jumped from the roof of her sister’s house yesterday. She was immediately moved to SSKM Medical College & Hospital where she succumbed to her injuries.

The hospital authorities informed the police and a team from the local police station reached the spot and started a preliminary investigation. The police also said that after interrogation, the family members of the woman revealed that she was suffering from depression and mental problems for a long time due to not getting regular work for the last two years. A case of unnatural death has been registered at Pragati Maidan police station in Kolkata. The police is probing all aspects.