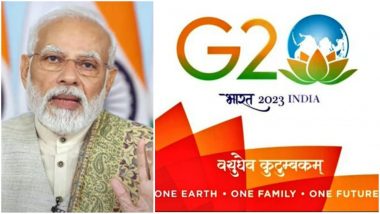 Lucknow, January 19: The G-20 conference, which is going to be held in four cities of UP, will prove to be an opportunity to increase the beautification of all the municipal bodies of the state. Following the instructions of Chief Minister Yogi Adityanath, the Urban Development Department has started implementing the preparations. The department has instructed all the bodies of the state to get involved in preparations for the G-20 conference. Urban Development Minister AK Sharma said that the state has got the opportunity to host the G-20. This is a golden opportunity to present the best image of the state.

Said that the first meeting of the G-20 conference will be held in Agra on February 11-12. After this, meetings of the G-20 conference will be held in Lucknow from 13 February. The arrangements are being strengthened in the four cities where the G-20 meetings are being held, along with this instructions have been given to beautify all the 75 districts of the state. The entire state is being prepared for this hospitality. We have started the campaign of UP G-City. The effort is that how we can develop our cities as global cities. This is an innovative effort to make the cities of the state world class.

Amrit Abhijat, Principal Secretary, Urban Development Department said that this time the G-20 conference organized in India is also being projected as the mother of democracy. The state government is also seeing this conference as a big opportunity. In these, digital transfer of funds from Kisan Pension Yojana, Mime Mitra, cultural tourism (Kumbh, Ram Mandir), Kovid Control Center etc. should be displayed.

He told that G-20 is a group of twenty largest economies of the world. With the Global Investors Summit and the target of one trillion economy, Uttar Pradesh has an important role in the economic development of the country. This event is a great opportunity to present the cultural diversity, heritage, tourist places etc. of Uttar Pradesh in front of the world. Along with this, to connect the general public of the state with this event, a walkathon and marathon will be organized simultaneously in each district on January 21. During this, Chief Minister Yogi Adityanath will start the walkathon by showing the flag of G-20 conference from Lucknow. Various products of One District One Product will be demonstrated to the delegates coming during the event, due to which these products will get an international platform.

According to the official, the host cities are being displayed their heritage by beautification, signage, state-of-the-art arrangement of lighting, painting from the airport to the main city and other places. Instructions have been given to name each park and each road in these cities after the G-20. Apart from this, programs based on women will be organized in Agra.

He told that various types of cultural programs will be organized during the G-20 conference. The effort will be that our foreign guests feel more and more connected with our culture. For this, along with cultural programmes, special focus will also be given on catering and dress etc.