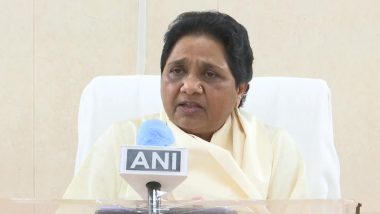 Lucknow, January 15: Bahujan Samaj Party (BSP) president and former Chief Minister of Uttar Pradesh Mayawati on Sunday targeted the ruling Bharatiya Janata Party (BJP), raised questions about the Electronic Voting Machine (EVM) and demanded elections through ballot papers. At the same time, he announced to contest elections on his own in the assembly elections to be held in many states this year and next year in the Lok Sabha. Mayawati addressed a press conference organized on Sunday on the occasion of her 67th birthday being celebrated as ‘Jan Kalyan Diwas’ at the state headquarters of BSP at Mall Avenue. Questioning the intention of the ruling BJP, he said, “The disgusting politics that is being done in the guise of fixing law and order in the entire country including Uttar Pradesh is not hidden from anyone.”

The BSP chief strongly demanded from the Chief Election Commissioner to conduct the elections through ballot paper, saying, “There are various kinds of apprehensions prevailing in the people regarding elections through EVMs in the country and it would be better to eliminate them.” That now all elections, small and big, should be conducted here with ballot papers as before.” Appealing to Dalits, backward, Muslims and other religious minorities to unite, he said, “On the occasion of my birthday, I want Dalits, Adivasis I consider it necessary to remind the people of backward, Muslim and other religious minority societies that Baba Saheb Ambedkar, the original architect of the Indian Constitution and the messiah of the weak, neglected class, gave self-respect to the victims of the caste system and to make them stand on their own feet. Legal rights have been given to them and they will have to take the ‘master key’ of central and political power in their hands by creating brotherhood among themselves. Also read: Bharat Jodo Yatra: Kapil Sibal praised ‘Bharat Jodo Yatra’ and Rahul Gandhi

It is notable that Mayawati has been raising questions about the role of EVMs in the past and now she has once again insisted on the demand for holding elections through ballot paper for the Lok Sabha elections to be held in 2024. Mayawati said that the main goal of the BSP, a well-wisher of the people of Bahujan Samaj, is to stay away from the moneylenders and fulfill their social and economic goals by winning the elections on the strength of the alliance of brotherhood among the people of this Bahujan Samaj, made up of SC-ST, OBC and Muslim society. have to receive. The BSP chief said that strictly following this principle, I also want to make it clear that in 2023, the state assembly of Karnataka, Rajasthan, Madhya Pradesh, Chhattisgarh and the next year in the country’s Lok Sabha elections, BSP will contest elections in alliance with any party. Will not fight, but will contest all the elections on her own strength alone.

He said that it has also become necessary to make this policy announcement because Congress and some other parties are deliberately creating confusion by spreading the talk of alliance with BSP under conspiracy, whereas BSP has made any alliance at the state level in Uttar Pradesh so far. Except in Punjab, our party did not get encouraging votes, due to which the party has suffered a lot. Mayawati stressed that due to the bad experiences so far, our party has decided to contest the general elections to the Vidhan Sabha and the Lok Sabha alone. It is noteworthy that in the 2019 Lok Sabha elections, the BSP allied with the SP in Uttar Pradesh and won 10 of the state’s 80 seats. Earlier in 1993, there was an alliance between the SP-BSP during the assembly elections and both the parties formed the government in the state under the leadership of Mulayam Singh Yadav, but in 1995 the alliance of both the parties broke down and Mayawati became the Chief Minister with the support of the BJP. Then, almost 24 years after breaking the alliance with SP, the SP-BSP again contested the elections together, but only after the election results, the relationship between the two broke again.

Directly attacking the Congress, the BJP and the Samajwadi Party (SP), the BSP chief said that the experiences so far show that due to these casteist governments, the people of these sections have not been properly benefited from their legal rights given in the constitution. Could get. Mayawati said that especially in the matter of reservation, right from the beginning the opposition parties including Congress, BJP and SP have not been honest towards their constitutional responsibility. The attitude of these parties has been casteist and cruel, not only in the matter of implementing reservation for Scheduled Castes and Scheduled Tribes, but also regarding reservation for Other Backward Classes (OBCs). He said that the Mandal Commission report was not allowed to be implemented in the Congress-led government and the reservation for SC-ST was made ineffective. Now the BJP is also following the footsteps of the Congress in this matter and is doing grossly unfair work, due to which the Uttar Pradesh civic elections have also been affected.

Describing the state’s main opposition party SP as an opponent of the most backward, Mayawati said, “Not only this, the SP-led government has cheated especially the most backward by not giving them their full rights.” During its tenure, the SP government had taken the initiative to remove 17 other backward castes from OBC and include them in Scheduled Castes and deprived their families of OBC reservation. These castes could not join either OBCs or SCs and for this the SP-led government was reprimanded by the court, then these castes reverted to their old status. Abolished it and tore its bill in Parliament.

Mayawati said, “You all know that in the first month of every new year, on January 15, people of my party celebrate my birthday. First of all, I express my heartfelt gratitude to my well-wishers and especially to the people of BSP, who are celebrating my birthday across the country following the rules of Kovid-19 this time too. Keeping in mind the humanist thinking and movement of Ji Maharaj, Narayana Guru, Baba Saheb Ambedkar and Kanshi Ram, I have dedicated my life under which they (BSP workers) are celebrating my birthday today as ‘Public Welfare Day’. These people help the poor, helpless and other needy financially according to their capacity and are doing it this time too. Following these ideologies, the BSP formed the government in the state four times under its leadership.

The government led by my party started many new public interest schemes on the occasion of my birthday. But the opposition parties having casteist, narrow, communal and capitalist mindset did not like this and they unitedly prevented BSP from coming to power by adopting the policy of equal-price-penalty-discrimination and many tricks, it is well known. Criticized the policies of BJP and also criticized the Global Conference of Investors to be held in the second week of February. He said that it is not going to be of any use. On this occasion, Mayawati released the 18th Hindi and English edition of the book ‘Mera Sangharshmay Jeevan’ written on the journey of her struggle.