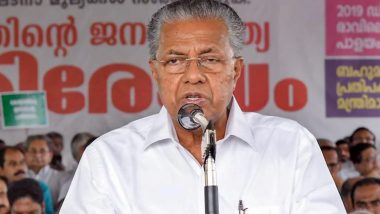 Thiruvananthapuram, January 15: In Kerala, from the second half of 2022, there is a war between Governor Arif Mohammad Khan and the Chief Minister of the government, Pinarayi Vijayan. There were times when the fight between the two crossed all levels of political decency. Governor Arif Mohammad Khan and Chief Minister Pinarayi Vijayan both come from strong political background and hence it became an issue of arrogance. But with the new year there seems to be some relief. Both the seasoned veterans are silent. Khan began his political career as a student leader and became the president of the Aligarh Muslim University Students’ Union in 1972–73. However, he started with a defeat when he contested his first assembly election from Siyana constituency of Bulandshahr on Bharatiya Kranti Dal ticket. But in 1977, at the age of 26, he became a member of the Legislative Assembly of Uttar Pradesh and since then there was no looking back in an eventful political career. After joining the Indian National Congress, he was elected to the Lok Sabha from Kanpur in 1980 and from Bahraich in 1984.

What followed was a major game changer in Khan’s political career when, in 1986, he quit the Congress party following differences over the passage of the Muslim Personal Law Bill, which was piloted by late Prime Minister Rajiv Gandhi in the Lok Sabha. Khan was against the law preventing Muslim men from paying alimony to their divorced wife or wives and resigned due to differences with Rajiv Gandhi on this issue. Khan then joined the Janata Dal and was re-elected to the Lok Sabha in 1989. Khan served as the Union Minister for Civil Aviation and Power during the Janata Dal regime. He then left the Janata Dal to join the Bahujan Samaj Party and again entered the Lok Sabha in 1998 from Bahraich. Also read: Congress MP Santokh Chaudhary cremated with state honors in his native village

Khan held the post of minister from 1984 to 1990. He joined the Bharatiya Janata Party in 2004 and contested the Lok Sabha elections that year as a BJP candidate from the Kaiserganj constituency, but was unsuccessful. In 2019, the Narendra Modi government elected him as the new Governor of Kerala. When Khan reached Kerala, Vijayan was at his peak and both the party and the government were under his control. Khan took his time to study all the political issues. Khan soon swung into action and Vijayan’s personal secretary K.K. Expressed strong displeasure over Ragesh’s wife Priya Varghese being appointed to a teaching job in Kannur University.

Khan said that universities have been made a department of CPI(M) and politics is happening here. He became more strict after the Supreme Court gave its verdict regarding the Vice Chancellor of Kerala Technological University. Soon Khan took up the issue with the vice chancellors of 10 other universities and the matter is currently before the court. Vijayan asked the Left Democratic Front to express their anger against Khan and gathered in front of his official residence. While Vijayan and his cabinet members stayed away, all other Left leaders and around one lakh of their workers gathered at Khan’s residence to express their displeasure against Khan.

Vijayan then scorned Khan when Khan sent invitations to Vijayan and his cabinet members to attend a Christmas party. Then CM had a party in which invitation was not sent to Khan. A bill was introduced in the Kerala Assembly to remove the governor as chancellor of universities, but Khan said he would not take a decision on it and the bill is expected to be sent to the President. And when things seemed out of control, Khan gave his assent to Saji Cherian’s return to the cabinet and also administered him the oath. Saji Cherian had attacked the constitution after which he had to lose his ministerial post. In return, the state government decided to end the assembly session. Now Khan will be able to give his speech in the Kerala Assembly.

Meanwhile, Khan criticized the Congress, with Leader of the Opposition VD Satheesan saying he did not need to learn anything from the “man” who changed more than half a dozen political parties. Satheesan said about Khan and Vijayan that when the day begins both are enemies and when the sun sets, they become friends and the silence is because Khan had sent a packet of Kashmiri Halwa to Vijayan. Political analysis says that this silence is a temporary pause. Both are waiting to strike while the iron is hot. Therefore, all eyes are fixed on Khan’s address in the assembly on 23 January.