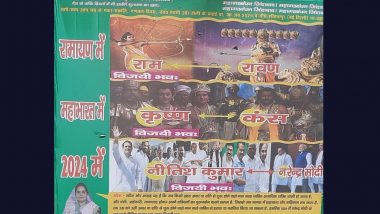 This poster released by Poonam Rai, State General Secretary of Mahila RJD, has been divided into three parts. In one part of this poster, showing two episodes of Ramayana and in the second part of Mahabharata, the third part shows the Lok Sabha elections of the year 2024, in which Nitish Kumar is shown shooting an arrow at Narendra Modi. It is written that Patna, Ranchi, Delhi, Mumbai, Kolkata, Hyderabad! Fertilizer will be applied in the rest of the country as well.

This is not the era of the war of the monarchy. There is an era of vote injury in democracy.

But what to kill the dead!

By the way, what do you idiots with RJD posters think about the rhyme of Tej (Pratap)-Tej (Swee)! pic.twitter.com/c4HbBlq3R3

It has been said in the poster that in 2024 Delhi (Hastinapur) will be climbed. In this poster, along with Nitish Kumar, all the opposition leaders including Lalu Yadav, Tejashwi Yadav, Rahul Gandhi, Akhilesh Yadav and Sharad Pawar have been shown, while Home Minister Amit Shah and BJP National President JP Nadda have been shown with Prime Minister Modi.

It is also written in the poster that the message and request is that when a person with a name starting with a particular letter or zodiac sign becomes extremely powerful and starts misusing his powers by being arrogant, arrogant, dictator There is hue and cry, then he can be defeated or defeated by a person whose name starts with the same letter or zodiac sign. That’s why in 2024, may Nitish Kumar ‘N’ Akshar be victorious over Narendra Modi.

Here, BJP spokesperson Nikhil Anand said that this is not the era of war of monarchy. There is an era of vote injury in democracy. Ram-Ravana, Krishna-Kansa is fine. But instead of Nitish-Namo, Namo-Nitish can also be written, but what to kill the dead.