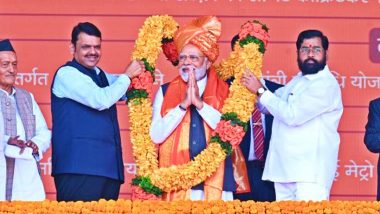 Mumbai, January 19: Inaugurating the Bharatiya Janata Party’s election campaign for the BMC elections, Prime Minister Narendra Modi on Thursday said that for the rapid progress of Mumbai, it is necessary to have the same government at the Centre, the state and the city. He said- For a city like Mumbai, rapid development is not possible without eye contact between the central and state and local government. There is no dearth of money, only it should be used for the right purposes. It should not be kept locked in the bank or in the pocket. Mumbai Metro: PM Modi gave a gift of Rs 38,000 crore to Mumbaikars, Metro flagged off on these routes

Appealing to vote for the BJP in the upcoming BMC elections, Modi said it is necessary to have a government that works together at all levels, and the current double-engine governance is working wonders. Addressing the rally at Bandra Kurla Complex, Modi patted Chief Minister Eknath Shinde and Deputy CM Devendra Fadnavis and said Mumbaikars suffered for a short period (during the Maha Vikas Aghadi rule) when the double engine government was not in power. and development projects were lying languishing.

He said- But now he is back and the city is progressing fast. Major projects like Mumbai Metro Rail Network, Coastal Road Project, Mumbai Trans Harbor Link, Navi Mumbai International Airport, Dharavi Redevelopment and Chawl Revamp Project are coming up at a fast pace, and many more will be taken up. The PM said that the Shinde-Fadnavis government has accelerated all the projects, which were once available only to the elite, will now be available to the common people.

He said that now railway stations are also being designed like airports, Chhatrapati Shivaji Maharaj Terminus will be redesigned with separate facilities for the convenience of long distance commuters and suburban commuters. Railway stations are being made multi-modal connectivity hubs with all facilities like metro, bus, taxi, auto under one roof and this is being replicated across India on ‘Mission Mode’.

Modi said the government is investing heavily in development projects in all cities and in the next 25 years, Maharashtra will play a major role and contribute to India’s progress, for which Mumbai is also being prepared in a big way.

The Prime Minister dedicated several projects and took a ride on Navi Mumbai Metro Line 2A and Line 7 from Gundavali station to Airport station. During this, Governor Bhagat Singh Koshyari, Shinde, Fadnavis, several Union Ministers of Maharashtra, State Ministers, MPs, MLAs and other dignitaries were present.