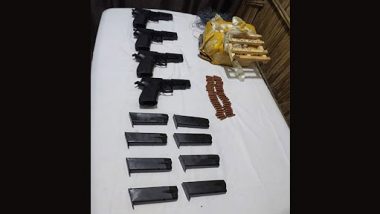 New Delhi, January 18: The Border Security Force (BSF) has seized four Chinese-made pistols among a consignment of weapons dropped by a Pakistani drone in Punjab’s Gurdaspur district, the force said on Wednesday. On the intervening night of Tuesday and Wednesday, a consignment of 4 Chinese-made pistols, eight magazines and 47 live rounds was recovered from Uncha Takla village of Gurdaspur. On the misty night of 17/18 January 2023, a BSF party deployed on the outskirts of Uncha Takla village in Gurdaspur heard the buzzing of a suspicious drone coming from Pakistan. Taking quick action, the BSF team fired in the direction of the sound of the suspected drone. Also read: J&K: Two Lashkar terrorists killed in Budgam encounter, both terrorists escaped last time

During the firing, the party also heard the sound of something falling in the nearby area,” the BSF said in a statement. Further, during the initial search of the area, the BSF said, in the cultivation field on the outskirts of Uncha Takla village A packet with a wooden base frame was found lying. “On opening this packet, 4 pistols (made in China), 8 magazines and 47 rounds were recovered.”

The BSF, which is mandated to guard the 3,323-km India-Pakistan border, said a detailed search of the area is underway. BSF said, “The alert BSF jawans have once again foiled the nefarious design of smugglers through drones.”