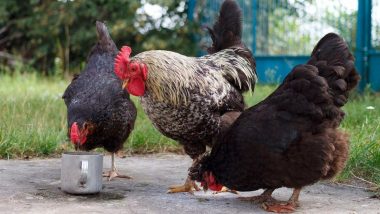 Amaravati, January 14: On Saturday, the first day of the Sankranti festival, transactions worth crores of rupees took place in various parts of Andhra Pradesh despite restrictions and several measures by the police. Organizers backed by politicians organized massive cock-fighting competitions in the united East Godavari, West Godavari, Guntur and Krishna districts. Big bettors did crores of business on the cock fight, which was banned in 2018 on the orders of the Supreme Court.

As before, the organizers built huge akhadas in towns and villages. Some even put up digital screens to show live cockfights. They also deployed bouncers and installed CCTV cameras to ensure that no problems arise. Organizers could see wads of currency notes in their hands and well-trained chickens with small knives tied to their legs fought amongst the applause of the audience. . The fight often ends with the death of one of the two birds.

The organizers also made special seating arrangements for VIPs and provided food and liquor to bookies and spectators. Describing it as a part of Telugu culture and tradition, the organizers said that Sankranti celebrations are incomplete without it. Leaders of the ruling YSR Congress Party (YSRCP) not only inaugurated cockfights at some places but also blamed the police for taking action. He argued that cock fighting during Sankranti is a part of the tradition.

Police put up banners warning people against violating Supreme Court orders banning cockfighting. Police also conducted raids and registered cases against some people. However, after public representatives themselves joined the organizers and even inaugurated the Games at several places, the police decided to relent. Policemen were either not present in the villages where the games were organized or they turned a blind eye.

Politicians, businessmen, celebrities and others flocked to the cock fighting arena. A large number of cars were seen parked at some places. Ambedkar MLA Chirla Jaggireddy vented his anger at the police for trying to stop the cockfight at Ravulapalem in Konaseema district, when the police tried to remove the tents as cockfighting and other sports were not allowed to be held there. Arrived and flared up at the police officer.

The MLA asked the police that what is their work in the cock fighting ground. Later he inaugurated the cock fight. Every year during Sankranti, ‘Kodi Pandelu’ or cock fighting competitions are held in different parts of Andhra Pradesh especially in the coastal region, Court orders banning cock fighting and steps taken by the police have affected the organisers. Had no effect.

Bird lovers are demanding implementation of the Supreme Court order banning cock fighting. People for the Ethical Treatment of Animals (PETA) India demanded strict action from the police to implement the court order. The organization says that instigating and organizing animal fights is a punishable offense under the Prevention of Cruelty to Animals (PCA) Act, 1960.

andhra pradesh there is no control on cock fighting betting crores