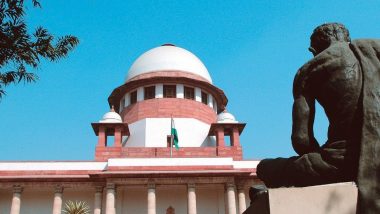 Default Bail Can Be Cancelled: The Supreme Court on Monday said that the default bail granted to an accused can be canceled on merits if a strong case is made out on the filing of the charge sheet, as premium cannot be imposed on it. Justice M.R. A bench headed by Shah asked former Andhra Pradesh minister Y.S. Considered on merits the CBI’s plea for cancellation of bail of Era Gangi Reddy in the murder case. Former Andhra Pradesh minister Y.S. Vivekananda Reddy, Chief Minister Y.S. Jagan was Mohan Reddy’s uncle. He was murdered at his residence in Pulivendula on March 15, 2019.

The bench comprising Justice C.T. Ravikumar said that mere non-filing of the charge sheet (within the time limit) would not be sufficient when a strong case was made out against the accused, as it remanded the matter back to the High Court for a fresh trial in accordance with law. Can think from Also read: SC On Live-In Relationship: Rape case cannot be filed later if the relationship deteriorates in live-in relationship: Supreme Court

The bench said, “Courts have the power to cancel bail and to inquire into the merits of a case where the accused has been released on default bail and has not been released earlier on merits. Such interpretation shall be to further the administration of justice.

The top court was considering whether bail can be canceled after the charge sheet is filed, while bail was granted for not filing the charge sheet within 90 days. The bench said that mere filing of the charge sheet would not lead to quashing, unless a strong case is made out that the accused has committed a non-bailable offence.

The bench said, “Subsequently on rectifying the defects and filing of the charge sheet, though a strong case is made out that an accused has committed a very serious offense and a non-bailable offence, the court cannot cancel the bail and detain the person cannot take into account and consider the seriousness of the offense committed by the accused, the courts would be averse to such an interpretation, as it would result in failure of justice.

The top court said that the courts have the power to cancel bail and examine the merits of the case, where the accused has been released on default bail and has not been released earlier on merits. Such an interpretation would be to further the administration of justice.