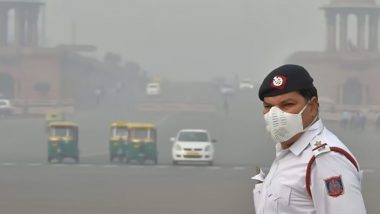 New Delhi, January 22: The air quality in the national capital Delhi slipped to the very poor category on Sunday and the city’s Air Quality Index (AQI) was recorded at 373. According to the System of Air Quality and Weather Forecasting and Research, the air quality at Lodhi Road in the city reached the severe category at AQI 429. On Sunday, both the major pollutants PM 2.5 and PM 10 were also recorded in the very poor category at 374 and 310 respectively in the city.

According to SAFAR data, the air quality index at Lodhi Road was recorded as 351 in the very poor category, while the city’s Pusa recorded an AQI of 368 on Sunday. Meanwhile, the India Meteorological Department has predicted light scattered rains in Punjab, Haryana, Chandigarh, Delhi and Uttar Pradesh on January 23. After that there is a possibility of heavy rain with thunder during 24 to 26 January.

According to IMD, no significant change in minimum temperature is likely over most parts of northwest and central India during next 5 days. The Meteorological Department has also predicted dense fog during the night and morning hours in Himachal Pradesh and Bihar during the next 24 hours and Odisha during the next 48 hours.