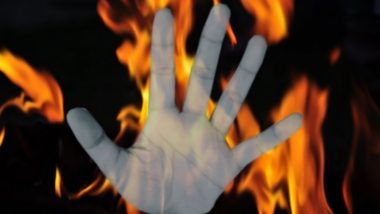 New Delhi: A 28-year-old man committed suicide by setting himself on fire in Delhi’s Kalyanpuri area. An official gave this information on Saturday. According to the official, the deceased has been identified as Rahul and was a private driver. This incident happened on Friday night. According to East Delhi Deputy Commissioner of Police Amrita Guguloth, a PCR call was received at Kalyanpuri police station at around 10 pm on Friday night. The caller said that a man had set himself ablaze near the Mother Dairy booth near Kalyanpuri bus stand in Khichdipur. is putting

The victim was already taken to LBS hospital before a police team reached the spot. Initial inquiries revealed that the victim had come in a Santro car and had put some inflammable substance on his body before setting himself on fire. Crime and FSL teams also inspected the spot. The victim was taken to Safdarjung Hospital where he died during treatment. Intranasal Covid Vaccine: India’s first intranasal Covid vaccine will be launched on January 26, Lumpy virus vaccine also ready

The officer said that the victim’s wife had left him about a year ago and he was currently living with his parents and brother. A case has been registered under section 306 (abetment of suicide) of the Indian Penal Code and investigation is underway.