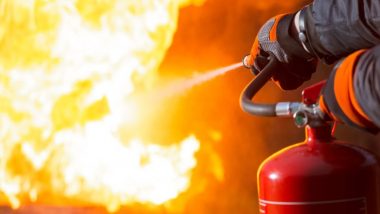 Gurugram, January 9: More than 200 shanties were gutted in a massive fire in a slum near Ghasola village in Sector 49 area of ​​Gurugram on Monday. However, no casualties have been reported in the incident. Officials said that the fire spread due to the explosion of more than 150 small and big gas cylinders. A senior fire official said that more than 20 fire engines along with 100 firefighters were pressed into service to douse the blaze. It took more than four hours to control the fire, but by then a large number of shanties had been gutted.

He told that the incident took place in a slum at 11.30 am on Monday, which soon spread to other slums. It is estimated that more than 2,000 people were rendered homeless due to this incident of fire, and many more people’s valuables like TV, refrigerator, cash, jewelery and important documents got burnt. Also read: Gurugram Fire: Fierce fire in Manesar, slums burnt to ashes within 5 km radius, 1 dead, many injured

Police, civil defense team and some non-governmental organizations were present at the spot to help people reach a safe place.