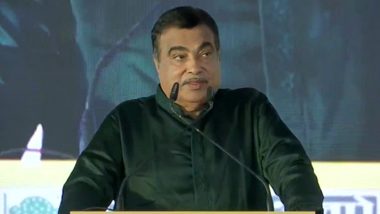 New Delhi, January 13: Union Road Transport and Highways Minister Nitin Gadkari said on Thursday that work is underway on a policy to set up ethanol pumps across the country. Addressing a bio-energy summit organized by industry body CII, he said he would meet Petroleum Minister Hardeep Puri within the next 15 days to work out a policy to set up ethanol-based pumps in the country.

The minister said that if ethanol is mixed up to 20 per cent in petrol, then 1,000 crore liters of ethanol will be required. He said that many leading manufacturers are ready with motorcycles that can run on 100 per cent bioethanol. Gadkari said that even autorickshaws that run on bioethanol can also be manufactured. ALSO READ: Amit Shah to meet families of Rajouri terror attack victims in Jammu and Kashmir today