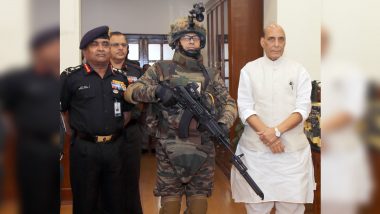 Indian Assault Rifle: It is very important to keep updating the standards related to security according to the demand of time. In view of the rapidly changing global scenario, India is also equipping the security forces with modern military equipment. In this sequence, India has started producing AK-203 assault rifles in the country itself, achieving great success. Not only this, soon after the first batch of 7.62 mm Kalashnikov is ready, it will be delivered to the Indian Army.

Finally, after a decade of waiting, the production of AK-203 assault rifles has started. PM Modi formally launched the scheme on March 3, 2019, to manufacture AK-203 rifles at the Korwa Ordinance Factory in Amethi, Uttar Pradesh in collaboration with Russia. This project will be known as Indo-Russian Joint Private Limited. This rifle is being jointly manufactured by Advance Weapons and Equipment India Limited, Munitions India Limited and Russia’s Rosoboron Export and Concorn Kalashnikov. The first 70 thousand AK-203 rifles of 7.62 X 39 mm caliber will have Russian components, but after that this rifle will be completely indigenous. These rifles will enhance the capability of the Indian Army in counter insurgency and counter terrorism operations.

These rifles of the Kalashnikov brand, being prepared indigenously for the armed forces, are equipped with many features.

The length of these indigenously made rifles is about 3.25 feet and the weight of a rifle loaded with bullets will be about four kilograms.

It will also be very effective in night operation, because it is capable of firing 10 rounds of fire in a second i.e. 600 bullets in a minute.

If needed, 700 rounds can also be fired from it.

Along with this, the AK-203 assault rifle can easily penetrate the target coming in the range of 300 meters.

The bullet speed of AK-203 assault rifle is 715 kilometers per hour.

–The new assault rifle will have both automatic and semi-automatic systems like the AK-47, which will fire once the trigger is pressed.

Defense self-reliance is getting strengthened

The Ministry of Defense is continuously moving towards enhancing its capabilities with state-of-the-art technologies and making India an indigenously self-reliant country. To achieve this goal, India is providing indigenously manufactured defense equipment to the armed forces guarding the borders with courage and dedication. The result of this successful effort of the government for self-reliance and the preparedness and preparedness of the armed forces is that today India has a completely reliable security system. In this sequence, Russia and India will continue to implement military-technical cooperation projects while advancing defense self-reliance. Rosoboronexport aims to take forward the ‘Make-in-India’ initiative by supporting the Indian side in terms of transfer of technology. In future, the company may upgrade its production facilities to increase the production of advanced rifles based on the Kalashnikov assault rifle platform.

Many more equipment being prepared indigenously

India is moving fast in the direction of Ordnance Factory under self-reliant India. Along with this, India has also banned the import of many defense equipment, which will be produced indigenously. In this sequence, apart from various day and night vision equipment prepared by the Ordnance Factory of Dehradun, 11 completely indigenous equipment have also been launched. India is now giving more preference to indigenous weapons under ‘Make in India’. This thing has come to the fore in many government decisions in the past years. Recently, the Ministry of Defense has approved several schemes to indigenously prepare equipment for the security forces, including the manufacture of bullet proof helmets for the armed forces.

In this era of globalization, military based security has become more important than ever for the stability and economic progress of the world. India is also prepared to deal with any situation that may arise due to the rapidly changing global scenario. For this, the government is paying special attention to strengthening the security infrastructure by equipping the army with state-of-the-art indigenous weapons/equipment. Countries around the world today are moving towards modernizing and strengthening their military power due to the global security scenario, due to which the demand for military equipment is continuously increasing. India is also moving ahead in this sequence, for this it has implemented many policies which will help our public or private sector companies to become world class companies. India is making every effort to realize the vision of ‘Make in India, Make for the World’ in the defense sector.