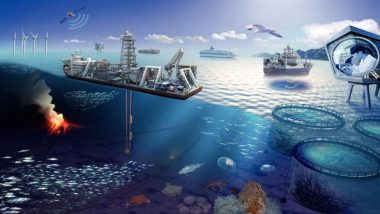 India Blue Economic Policy: India is starting a campaign to explore resources like minerals under the Samudrayan mission. In this, three people will go to the depth of 6 thousand meters in the sea and do research. Earth Sciences Minister Dr. Jitendra Singh said that the submarine named Matsya will take three people to the sea to a depth of 6,000 meters. This mission is expected to be realized in the next three years. He told that this vessel named Matsya has been developed by the National Institute of Ocean Technology, Chennai. Online Gaming: India’s first online gaming center of excellence to be built in Shillong

Research will be done at a depth of 6 thousand meters

The Deep Ocean Mission is an inter-ministerial program with an emphasis on the development of deep sea technology. For this, fishing submarine has been developed by the National Institute of Ocean Technology. The Matsya submarine has the capability to run for 12 hours in normal operating conditions. Also, it has the ability to run for 96 hours for human safety in case of an emergency. In this submarine, prepared under the Deep Ocean Mission, three people will go 6 thousand meters deep into the sea and gather information about the resources of the sea by looking for possibilities for India. In an effort to develop the Blue Economy of the Indian Ocean, India is also achieving encouraging growth in fish production with the ‘Blue Revolution’.

PM Modi had mentioned from the Red Fort

PM Modi mentioned the Deep Ocean Mission in the Independence Day address in 2021 and 2022. Regarding this, the Center has approved a budget of more than 4 thousand crore rupees for the Deep Ocean Mission for five years. The campaign aims to promote the Union government’s vision of a ‘New India’ that highlights blue economy as one of the 10 key dimensions of development. PM Modi had resolved to double the income of the farmers of the country, then for the first time he talked about ‘Blue Revolution’ i.e. ‘Blue Economy’ along with ‘Green Revolution’ and ‘White Revolution’ and the government is rapidly moving in this direction. Has been

Economy will be strengthened by Deep Ocean Mission

This mission has been started for the exploration of deep sea mining and mineral resources. This includes the development of technologies as well as manned submersibles for 6,000 meters of water depth. This mission will study life-friendly biological components in deep ocean conditions, which will try to throw light on the origin of life on Earth. This study is being done by the Ministry of Earth Sciences in collaboration with national and international organizations. The activities of the Deep Ocean Mission will help in developing the blue economy potential of the Indian Ocean.

What is blue economy?

A major part of India’s trade is through the sea route. In such a situation, the objective of this scheme is to link the country’s economy with the maritime sector. The vision of blue economy is environment-friendly, that is, the entire business model is built keeping the environment in mind. Blue economy is an important part of India’s economic development program as more than 95 percent of India’s trade is through the sea. The ambitious Sagarmala program of the Government of India will revolutionize the movement of goods through sea and port development in India. Under this program more than 600 projects have been identified, in which there will be a huge investment of about Rs 8 lakh crore.

India’s maritime position is unique in the world. Three sides of India are surrounded by oceans and about 30 percent of the country’s population lives in these coastal areas. A total of 7,517 km long coastline is home to nine coastal states and 1,382 islands of India. In view of this, given the strategic importance of the Indian Ocean region for the country, this mission will help India strengthen its hold in the South Asia region.