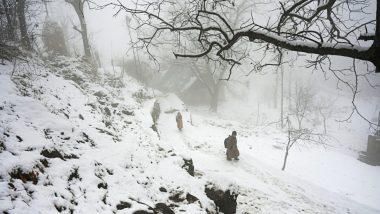 Srinagar, January 16: Night temperatures dropped in most parts of Kashmir as the weather remained dry in the region. Officials gave this information on Monday. Officials said the dry weather brought down the minimum temperature at most places in the Valley on Sunday night. The minimum temperature in Srinagar was minus 1.9 degrees Celsius on Sunday night, down from minus 0.6 degrees Celsius the previous night, they said. . Weather Update: Northwest India in the grip of severe cold, the temperature may fall further in the next two days.

The famous ski-resort Gulmarg in Baramulla district recorded a minimum temperature of minus 12 degrees Celsius on Sunday night as against minus 10.4 degrees Celsius the previous night. This resort was the coldest recorded place in Jammu and Kashmir.

From January 19-21, the weather will remain cloudy and light rain/snow is likely at isolated places mainly in the higher reaches. However, it said that from the night of January 22 to the forenoon of January 24, there would be very heavy rain and light to moderate snowfall in the plains of Kashmir (with rain in Jammu) and moderate snowfall in the middle and higher altitudes. .

minimum temperature drops at most places in kashmir