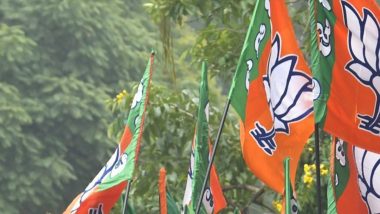 Jammu, January 11: National General Secretary of the Bharatiya Janata Party (BJP) B. Ale. Santosh on Wednesday asked the Jammu and Kashmir unit of the party to gear up for the assembly elections. During a meeting with senior party leaders in the Union Territory of Jammu and Kashmir, he stressed on strengthening the party units at the booth and assembly constituency level.

He asked the party in-charges to concentrate on winning the elections in their respective areas. A few days before this, senior party leader and Union Home Minister Amit Shah held discussions with the office-bearers of the Jammu and Kashmir unit in Delhi. read this also- Bihar Education Minister On Ramcharitmanas: ‘Ramcharitmanas hate book’, controversial statement of Bihar Education Minister

Assembly elections in Jammu and Kashmir are likely to be held this year, although no official announcement has been made so far. Addressing the party leaders, Santosh said, “A leader is born when he works selflessly for the victory of others and the organisation. That’s why all of you should dedicate yourselves to the organizational duties.”

He told the Jammu and Kashmir unit of the party to be ready for the elections. Union Minister Jitendra Singh, BJP national general secretary and in-charge of Jammu and Kashmir Tarun Chugh and Jammu and Kashmir BJP president Ravinder Raina also attended the meeting. In his address, Singh said, “This is the first major election campaign after the historic changes in Jammu and Kashmir and therefore we need to fight this election together.”

Referring to the abrogation of Article 370 of the Constitution that gave special status to Jammu and Kashmir, he said that it has paved the way for development and giving rights to every community.

It is noteworthy that in August 2019, the Center abrogated Article 370 and divided the state of Jammu and Kashmir into two union territories.