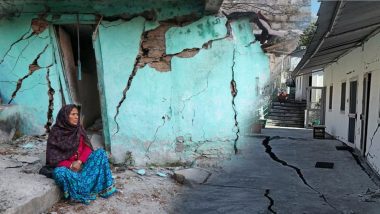 Joshimath, January 15: The situation of landslide happening in Joshimath is getting more and more serious. Like Hotel Malari Inn and Mount View, the Snow Crest and Comet hotels located on the way to the ropeway have also started getting skewed by the landslide. Both the owners have started vacating their hotels. On the other hand, cracks appeared in 22 more buildings in the city area on Saturday. The number of such buildings has now increased to 782. Devesh Kunwar, the owner of Comet Hotel, says that hotels have started sticking together. Keeping in view the security, shifting of the hotel’s belongings to safer places has already started. Said that its information has also been given to the administration.

Pooja Prajapati, owner of Snow Crest Hotel, says that the hotel is being operated since 2007. From last year till now the work of improving the hotel is being done, about one and a half crore rupees were spent on it. Now the hotel has started tilting due to landslides, due to which the work of shifting the goods has also been started. Also read: Three people including Delhi Police head constable arrested in ‘cow smuggling’ case

Even after giving information, the local administration did not inspect the hotels till Saturday evening. Late in the evening Joint Magistrate Deepak Saini along with his team inspected the spot. They will submit their report to the District Magistrate on Sunday. Secretary Disaster Management Dr. Ranjit Sinha told that so far 782 buildings have been identified, in which cracks have come. 22 buildings were identified on Saturday. He told that one ward in Gandhinagar, two in Singhdhar, five in Manoharbagh, seven in Sunil have been declared unsafe.

In these wards, 148 buildings are located in unsafe areas. From here, 223 families have been temporarily displaced for security reasons, while the number of displaced family members is 754. Secretary Disaster Management said that while increasing the capacity of the relief camps, arrangements have been made to temporarily accommodate 2,190 people in 615 rooms in Joshimath, while arrangements have been made to accommodate 2,205 people in 491 rooms in Pipalkoti.