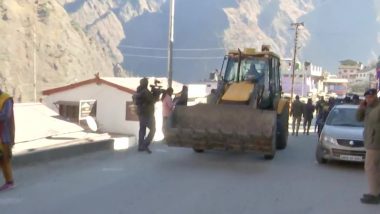 New Delhi, January 10: The Supreme Court on Tuesday agreed to hear on January 16 a plea seeking its intervention to declare the crisis arising out of landslide in Uttarakhand’s Joshimath as a national calamity. A bench of Chief Justice DY Chandrachud and Justice PS Narasimha, however, refused to list the petition filed by Swami Avimukteshwarananda Saraswati for urgent hearing, saying that not everything urgent should come directly to the court. Joshimath Sinking Row: After Joshimath, Karnaprayag is now in danger, many houses badly damaged (Watch Video)

The bench said, “There are democratically elected institutions to look into this. Not every important thing should come to us. We will list it for hearing on January 16. The petition was mentioned by advocate Parmeshwar Nath Mishra, appearing for Swami Saraswati. Petitioner Saraswati has claimed that the incident happened due to large-scale industrialization and has sought immediate financial assistance and compensation for the people of Uttarakhand.

Uttarakhand | Demolition of Hotel Malari Inn in Joshimath to begin shortly. SDRF deployed at the spot & announcements being made through loudspeakers for people to go to safer places.

The petition has also sought a direction to the National Disaster Management Authority to actively support the residents of Joshimath in this challenging time. “There is no need for any development at the cost of human lives and their ecosystem and if any such development takes place, it is the duty of the State to stop it immediately on a war footing,” pleads the saint. And it is the responsibility of the central government.

Joshimath, known as the gateway to famous pilgrimage sites like Badrinath and Hemkund Sahib and international skiing destination Auli, is facing a major challenge due to land subsidence. In Joshimath, the ground is slowly sinking and huge cracks are appearing in houses, roads and fields. Local people said that many houses have caved in. Chief Minister Pushkar Singh Dhami has ordered immediate evacuation of 600 families living in at-risk houses to safer places.