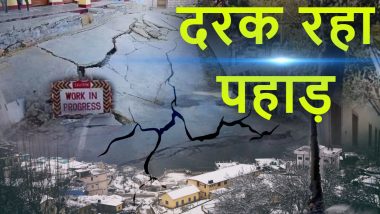 Nainital, January 12: The Uttarakhand High Court on Thursday directed the state government to prepare a robust plan for the landslide-hit Joshimath town in Chamoli district. Hearing a PIL related to the matter, a division bench of Chief Justice Vipin Sanghi and Justice Alok Kumar Verma directed the government to form a committee of independent experts to look into the matter. Joshimath Subsidence: Satellite photos of Joshimath surfaced for the first time, see which area is sinking in the pictures

The bench said that the committee should submit its report to the court in a sealed cover within two months.

The court also directed that an order banning construction activities in the surrounding areas of Joshimath be passed immediately.

Joshimath, the gateway to famous pilgrimage centers like Badrinath and Hemkund Sahib and the international skiing resort of Auli, is facing a major challenge due to the landslide. A total of 169 families living in the town have been shifted to relief centers so far.