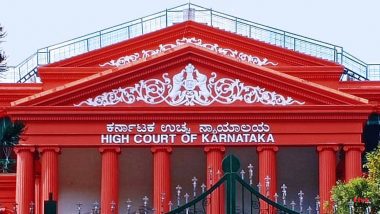 A bench headed by Chief Justice PB Varale and Justice Ashok S Kinagi passed the order recently after examining the contempt of court petition submitted by the court. The child’s father, despite being a lawyer, had violated the orders of the court. The bench took this matter seriously. Also read: Gujarat: Missing woman constable of Vadodara found in Maharashtra with lover, transferred

Naveen, a lawyer from Chennai, was married to Netra from Mysore. On April 27, 2022, the wife had filed a habeas corpus petition before the court, claiming that her minor son had been kept in captivity. Advocate Naveen appeared before the court on May 25, 2022 and submitted that he had not kept the son in captivity. He agreed to leave the child with the mother for 15 days every month. He had assured the court by giving a joint memorandum that he would not violate the order of the court.

After this the court closed the case. However, Netra again filed a petition in the court complaining that her son was not given her custody. The court had issued a notice to father Naveen on 13 July. When he did not bother to respond to the notice, the court directed the Tamil Nadu DGP to keep the notice in reserve on 1 September.

Despite this, Naveen remained absent from the proceedings of the court on 10 September. The court had issued a bailable warrant against him. But, Naveen did not respond to the notice. The court had then ordered that if he did not appear in the court, a non-bailable warrant would be issued against him. Meanwhile, advocate Naveen approached the Supreme Court in this regard, claiming that he was forced to sign a joint memorandum regarding the custody of the child. The apex court had rejected his plea and asked him to appear in the Karnataka High Court.

Finally he appeared before the court and claimed that due to the poor health of the child, he did not send him to the mother. He apologized for not complying with the court’s order and assured the court that he would honor the commitment regarding child custody. The court did not accept his explanation and apology. The court directed him to appear before the court along with his son, hand over the son to his mother’s custody and pay a fine of Rs 25,000.

The father appeared in the court on January 17 and handed over the custody of the child to the mother and paid the fine. After which the court closed the contempt of court case.