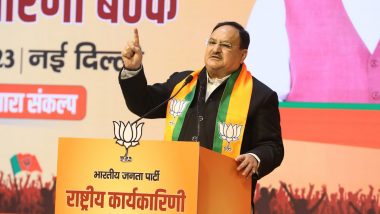 Lok Sabha Elections 2024: BJP National President JP Nadda has thanked Prime Minister Narendra Modi and all the members of the National Executive for extending his term as party president till June 2024, claiming that two-thirds of the 2024 Lok Sabha elections The BJP government has to be formed at the center with a majority of more than Nadda further said that poor welfare is his resolve. Expressing his gratitude for extending his presidential term, Nadda tweeted, “Heartfelt gratitude to Prime Minister Narendra Modi and all the respected members of the National Executive.

Let us tell you that, on Tuesday, the second and last day of the meeting of the BJP National Executive, in view of the preparations for the Lok Sabha elections to be held in 2024, approved the proposal to extend the presidential term of BJP’s current national president JP Nadda till June 2024. Went.

Giving information about the decision taken in the BJP National Executive meeting, Union Home Minister Amit Shah said that in the meeting, Defense Minister Rajnath Singh proposed to extend the presidential term of JP Nadda till June 2024, which was unanimously approved by the executive meeting by voice vote. Has been passed.