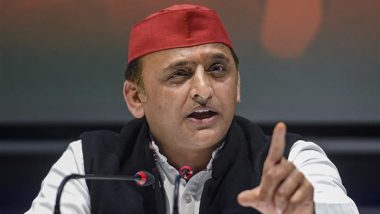 Lucknow, January 15: Samajwadi Party will now be seen struggling on the ground to make a good position in the 2024 Lok Sabha elections. She is working on a strategy to take an aggressive stand against the BJP on every issue. If the strategists of the Samajwadi Party are to be believed, the party, which is excited by the victory in the Mainpuri Lok Sabha and Khatauli Assembly by-elections, wants to maintain this enthusiasm among its workers till the Lok Sabha elections. For this, the SP has decided that till the 2024 Lok Sabha elections, the party will keep its attitude sharp against the BJP government.

According to a senior SP leader, the image of National President Akhilesh was being repeatedly created by the ruling and other parties as the leader of the drawing room and Twitter, to break which now his image is being created as a struggler. Akhilesh Yadav worked on the ground from morning till night in the Mainpuri Lok Sabha elections. As a result of this, this seat was seen getting good margins for the socialists. Also read: PM flags off Secunderabad-Visakhapatnam Vande Bharat Express train

The workers also got booster dose and they looked very enthusiastic. After this, the strategists of the party decided that now Akhilesh Yadav will visit every district till the Lok Sabha elections. Apart from this, the party will be seen on the streets against the government on every big and small issue. A committee has been constituted for this. Which will keep an eye on every small issue.

SP’s national spokesperson Dr. Ashutosh Verma says that the Samajwadi Party has been fighting for the public since the beginning. But BJP diverts towards communal issues to remove the issues related to the public.

That’s why now the issues of public up to the district, tehsil and mandal level like road, health, law and order, problems of farming farmers will be taken up at tehsil level. Its complete coordination will be under the supervision of the district president and a committee of senior leaders has been formed for the state level. Under his supervision every matter related to the public will now be taken up very loudly.

Senior political analyst Amodkant Mishra says that SP was disappointed in the elections held in Azamgarh and Rampur after the assembly elections. After this, the victory of Mainpuri Lok Sabha and Khatauli Assembly has given a new energy to the workers. Akhilesh has now understood that closed room politics is no longer right. Its message will not go well. For this reason, the senior leaders of his party have now started making a new plan. For this reason, after the victory of Mainpuri, Akhilesh himself has been seen struggling from district to district.

He told that many times he was accused that he does not give as much priority to the workers like his father Netaji. To break this image, the SP chief is seen standing firmly with his workers in the matter of harassment. Recently, Akhilesh Yadav had reached the DGP headquarters after the arrest of SP’s Twitter handle operator Manish Jagan Agarwal. After this, he had also reached Lucknow jail to meet him. Even before this, he is meeting former and present MLAs of jailed SP.