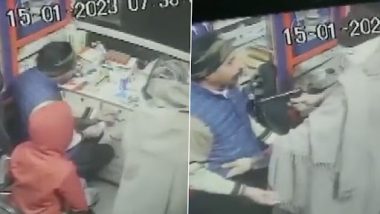 The owner of a medical shop in Punjab’s Faridkot was allegedly robbed at gunpoint. The entire incident was caught on camera, where a man pointed a gun at the medical store owner while his assailants ransacked the store. The gang allegedly looted Rs 40,000 from the shop owner. In the CCTV footage released by the police, the shop owner and an employee can be seen sitting at the front desk as a group of men appear to be customers. However, one of the gang members swung into action and caught the staff member. Due to which the owner of the shop becomes conscious and stands up from his seat. After this, a person wearing a mask took out a pistol and pointed it at the owner of the shop and the attackers took away the money from the cash register. Also read: Delhi Cash Van Loot: Cash van guard shot dead in broad daylight in Delhi, miscreant absconded after looting money