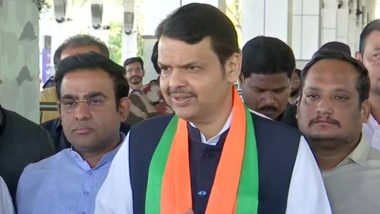 Mumbai, Jan 12: In an embarrassing situation for the Congress ahead of the Maharashtra Legislative Council elections, the party’s official candidate Sudhir Tambe on Thursday announced his withdrawal from the poll race, saying his son is currently contesting from his constituency. Will fight

Elections to the graduate and teacher constituencies of the council will be held on January 30 and Thursday was the last day for filing nominations.

Sudhir Tambe, a relative of former Congress Maharashtra unit president Balasaheb Thorat, has been representing the Nashik Division graduate constituency in the Maharashtra Legislative Council for the last three terms (18 years) and was re-nominated by the party.

Announcing his withdrawal from the polls, Tambe said his son Satyajit would contest as the party has decided to promote youth in politics.

However, Satyajit Tambe on Thursday filed nomination as an independent candidate and claimed that he was still associated with the Congress even when he had sought support from the Bharatiya Janata Party (BJP).

Sudhir Tambe said, “Youths are doing well in various fields and hence the party has decided to field youths like Satyajit Tambe from Nashik graduate constituency. The technical problem is that the party had given the ‘AB’ (nomination) form in my name, but we had already informed the party leadership that Satyajit would contest the election.

The ‘AB’ form indicates the official candidate of the party in the election.

The MVA is the opposition alliance consisting of the Congress, the Nationalist Congress Party (NCP) and the Shiv Sena (Uddhav Balasaheb Thackeray).

Satyajit Tambe told reporters, “You all know that the state’s Deputy Chief Minister Devendra Fadnavis (BJP leader) has a lot of affection for me. I wish that the BJP votes for me in the elections.

He said, “My father Sudhir Tambe has worked tirelessly for many years to protect the interests of teachers and graduates in the Nashik division. If I get a chance to become a member of the Legislative Council, I want to take his work forward.

Asked whether he intended to meet any Congress state unit leader before voting, he replied in the negative.

Satyajit Tambe said, “I do not see any need to meet Congress leaders when I am still a part of the same party. I am hopeful that in the elections (besides the opposition MVA allies), I will also get the votes of the BJP.”

The Maharashtra unit of the BJP said it may consider supporting Satyajit Tambe.

BJP’s state unit president Chandrashekhar Bawankule said in response to a question, “If Tambe approaches us and seeks our support, we can consider it.” The BJP is trying to strengthen its base in all parts of the state. We do not have a strong face in Nashik division, so we can extend our support to him. In politics, one plus one doesn’t have to be two, but it can be 11.”

The tenure of five members of the Legislative Council – two from graduate and three from teachers’ constituencies – will end on February 7. The biennial polls to fill the soon-to-be-vacated seats will be held on January 30, while the counting of votes will take place on February 2.