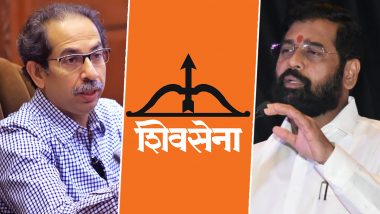 New Delhi, January 10: The Supreme Court on Tuesday said it will begin hearing on February 14 the petitions related to the political crisis arising out of the split of the Shiv Sena in Maharashtra. Senior advocate Kapil Sibal, appearing for Uddhav Thackeray’s Shiv Sena, told a five-judge constitution bench headed by Chief Justice DY Chandrachud that he would request that the matters related to the political crisis in Maharashtra be referred to a seven-judge bench so that it could Revisit the 2016 judgment on the powers of Speakers of Legislative Assemblies to dispose of disqualification petitions. Sibal told the bench, “We have filed the details of the cases before the seven-judge constitution bench. They (Shiv Sena faction led by Chief Minister Eknath Shinde) have filed a reply.

The bench also comprises Justice MR Shah, Justice Krishna Murari, Justice Hima Kohli and Justice PS Narasimha. The Chief Justice said, “We will put it up for hearing on February 14.” Sibal, seeking a reference of the matter to a seven-judge bench, sought reconsideration of an earlier verdict by the Supreme Court. In 2016, a five-judge constitution bench, while ruling on the Nabam Rebia case, had said that if a decision on the notice given earlier for the removal of the Speaker is pending in the House, then the Speaker cannot proceed further on the petition regarding the disqualification of the MLAs. . Also read: Kanjhawala Case: Hearing on bail plea of ​​accused Ashutosh Bhardwaj adjourned in Kanjhawala case

The decision proved beneficial for the rebel MLAs of the Shiv Sena led by Maharashtra Chief Minister Eknath Shinde in the top court on the grounds of pending notice for the removal of Deputy Speaker of the Assembly Narhari Sitaram Jirwal. Earlier this year, the Thackeray-led Maha Vikas Aghadi (MVA) government in the state fell after Shiv Sena MLA Shinde and 39 other MLAs rebelled against the party’s leadership. The Maha Vikas Aghadi government consisted of the Shiv Sena, the Nationalist Congress Party (NCP) and the Congress. Due to the rebellion in the Shiv Sena, the Thackeray-led faction and the Shinde-led faction split.