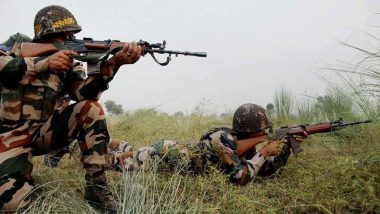 New Delhi, January 15: Pakistan is not desisting from its nefarious antics. The Border Security Force (BSF) once again foiled Pakistan’s conspiracy to send drugs and weapons through drones. A Pakistani drone trying to infiltrate inside the Indian territory from the India-Pakistan international border in Punjab was fired upon by jawans. The BSF fired 7 rounds at the Pakistani drone after the movement of the drone was seen late night in Kalia village of Tarn Taran district, adjacent to the India-Pakistan border of Punjab. Along with this, BSF jawans have also started a search operation in the area.

Let us tell you that this is the second time in the last few days, when the drone infiltration attempt made by Pakistan has been completely foiled by the soldiers. At present, a search operation is being conducted by the jawans in the entire area. Also read: Jammu-Kashmir: Pakistani woman crossed the LOC and entered the Indian border, detained by security forces

It may be noted that on January 3 also, at around 11 pm, through Pillar No. 146/14, which comes under Kalia village, the sound of Pakistani drone knocking was heard. Hearing the sound of this drone, the BSF jawans deployed on the border The drone was chased away while firing 15 rounds.