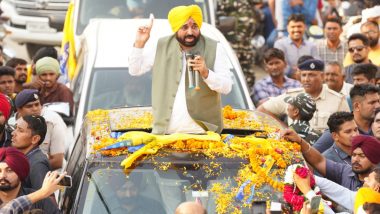 Gurdaspur, January 12: Punjab Chief Minister Bhagwant Mann has announced the naming of a road and a stadium leading to the village of police constable Kuldeep Singh Bajwa, who was killed in an encounter in Kuparthala. According to an official statement, Mann made the announcement after meeting Bajwa’s family on Wednesday. He also presented a check of Rs 2 crore to Bajwa’s family, which includes Rs 1 crore ex-gratia by the state government and Rs 1 crore life insurance.

Bajwa was killed in an encounter while chasing four miscreants in Kapurthala district of Punjab. These miscreants threatened the car owner at gunpoint on Sunday night and fled with his vehicle. Mann said that constable Bajwa was martyred while doing his duty in Phagwara. He reiterated the commitment of the state government to help the families of the jawans who laid down their lives for the country. Also read: PM Modi to inaugurate 26th National Youth Festival in Hubballi today

Mann announced that a stadium with a state-of-the-art athletic track would be constructed in his name in Bajwa’s village. He expressed hope that the youth of the region would use this stadium for training to join the Punjab Police and Armed Forces. The chief minister also announced that a road leading to the village would be named after Bajwa. He said that this initiative would recognize the remarkable contribution of a brave constable who laid down his life for the country.