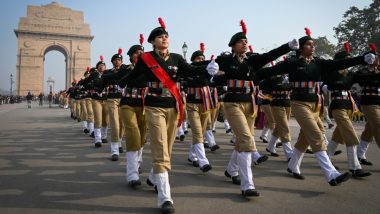 According to the order of the Ministry of Home Affairs, due to the preparations for the Republic Day, Vayu Bhawan, Kashmir House, Sena Bhawan, Udyog Bhawan, Nirman Bhawan, National Museum, Vigyan Bhawan, Ministry of External Affairs, DRDO Bhawan, South Block, North Block, Rail Bhawan, Sanchar Bhawan , Krishi Bhawan, 72 buildings including Shastri Bhawan will be sealed after anti-sabotage checks. Also read: Kerala: A man gets a total of 40 years in prison for raping his minor step daughter

On the other hand, on January 26, 20 buildings will be closed till 7:30 pm for the At Home function. Apart from this, for the Beating Retreat Ceremony on January 29, 32 buildings will be sealed after anti-sabotage checks from 12 noon to 7:30 pm. These include Red Cross Building, NDMC Tower, Raksha Bhavan, National Stadium, Coast Guard Headquarters and National Archives.

The Ministry of Home Affairs said that on January 28, on the day of the full dress rehearsal of the Beating Retreat, 8 buildings in Delhi will be closed from 4:00 pm to 7:30 pm. These include Sena Bhawan, Vayu Bhawan, DRDO Bhawan, South Block, North Block and Rail Bhawan. In the guidelines issued by the Ministry of Home Affairs, it has been said that during the Republic Day rehearsal from January 17 to January 29, Vijay Chowk, Duty Path, Janpath and Man Singh Road will remain closed for traffic. This restriction will be applicable only during the period of rehearsal. On the other hand, due to the rehearsal of the Beating Retreat Ceremony, parking of vehicles will not be allowed outside North Block and South Block after 3:30 pm on January 27 and 28. There will be a ban on parking here on January 29 as well.