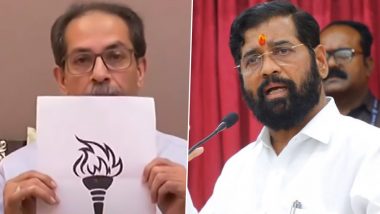 Shiv Sena Symbol Row: The Eknath Shinde faction of the Shiv Sena on Tuesday cited a 1971 Supreme Court judgment before the Election Commission, which recognized the group led by former prime minister Indira Gandhi as the original Congress. The Eknath Shinde-led faction of Shiv Sena cited this decision while claiming the party founded by Balasaheb Thackeray. Mahesh Jethmalani, the Shinde faction’s counsel before the Election Commission, also said that in 2018 there was a “secret and unconstitutional” change in the Shiv Sena constitution by Uddhav Thackeray and an ideological change in the party.

Due to this, the party formed the government in Maharashtra in 2019 in collaboration with the Congress and the Nationalist Congress Party (NCP), which caused a split in the organization. Most of the Shiv Sena MLAs led by Shinde rebelled, leading to the fall of the Uddhav Thackeray-led coalition government, and Shinde became the chief minister of Maharashtra in June last year with the support of the Bharatiya Janata Party (BJP). Since then, the Shinde and Thackeray factions of the Shiv Sena have been fighting for control over the organisation. Also read: Shiv Sena Symbol Row: Big blow to Uddhav-Shinde faction, EC bans name and symbol of Shiv Sena till further orders