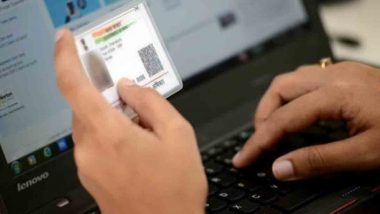 UIDAI New Guidelines: The Unique Identification Authority of India (UIDAI) has issued a set of guidelines for Offline Verification Seeking Entities (OVSEs) to address several issues related to misuse of Aadhaar and to instill confidence in people voluntarily using Aadhaar for legitimate purposes. Ways to increase it have been highlighted. Institutions have been informed to verify Aadhaar after the explicit consent of the Aadhaar number holder. These entities need to be courteous to people and assure them about the security and confidentiality of their Aadhaar while doing offline verification. Also, the entities need to provide information to residents for any future audit by UIDAI or any other statutory agency. A record of the explicit consent obtained should be maintained.

UIDAI has enabled OVSEs to accept Aadhaar in physical or electronic form as proof of identity instead of through QR code present on all the four forms of Aadhaar (Aadhaar letter, e-Aadhaar, m-Aadhaar and Aadhaar PVC card). Has been asked to verify. Also read: Aadhaar Card Update: Is the Aadhaar you have fake? Check quickly in these 3 steps

Further, the entities have been urged to ensure that no resident is denied any service for refusing or being unable to verify offline of Aadhaar, provided the people self-verify themselves through other viable options. be able to identify. It has been highlighted that OVSE needs to provide viable alternative means of identification to residents other than Aadhaar for service delivery.

Any Aadhaar can be verified using the mAadhaar app, or the QR code available on all forms of Aadhaar (Aadhaar letter, e-Aadhaar, Aadhaar PVC card, and m-Aadhaar) using the Aadhaar QR code scanner. Tampering of Aadhaar documents can be detected by offline verification and tampering is a punishable offense and is liable for punishment under section 35 of the Aadhaar Act.

The verification entities have to inform UIDAI and the resident concerned within 72 hours if they notice any misuse of the information. UIDAI cautioned OVSEs not to conduct offline verification on behalf of any other entity or individual and to ensure full cooperation to the authority or law enforcement agencies in case of any investigation related to misuse of Aadhaar.