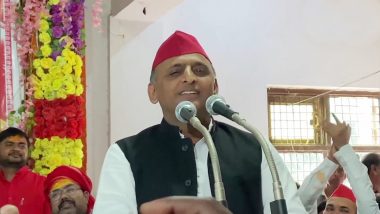 Lucknow, January 11: Samajwadi Party (SP) president Akhilesh Yadav has criticized the Uttar Pradesh government’s proposal to increase electricity rates by 23 percent. He said in a release, this is BJP’s blow to those people, who are already struggling with inflation. This step will increase the difficulties of the people.

The SP chief said that domestic consumers will suffer the most due to the increase in electricity and there will be an additional increase of 23 percent in the electricity bill. He said that this hike seems to be an attempt by the BJP to increase the prices. He further said, “The hike in electricity tariffs will hit the common man, farmers, traders and will add to the rising prices. As a result, the poor, lower middle and middle class will bear the brunt of the move.” Also read: Aligarh: Cracks in houses, atmosphere of panic among residents – Municipal Corporation will investigate

He further said, “In the assembly elections, the BJP had promised free electricity for irrigation to farmers, but this promise has turned out to be a ‘jumla’ (statement) like many others, which the BJP made before the elections. People were already fed up of paying rising prices of food products, cooking oil, fuel, pulses and food grains. Rising cost of education was already an added pressure.”