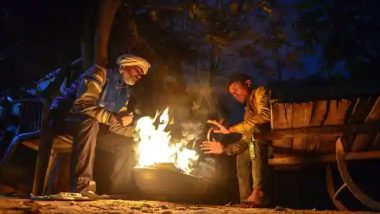 Noida, January 11: Be it children, old or young, everyone’s health is deteriorating this time. This time if he is suffering from cold, then he is not taking the name of recovery. No matter how much medicine you get done and the biggest thing is that even the doctors are surprised by this. Fever or cold which used to be cured within just 3 to 5 days. It is made for a long time. Due to increasing pollution, people are falling ill for a long time. The number of people reaching the hospital has also increased by about 15 to 20 percent. Those who are having difficulty in breathing due to this pollution and people are facing different types of diseases.

The health department is also very alert and worried about this matter. According to Health Department and District Gautam Budh Nagar official Dr. Chandan, increasing pollution and cold is proving very fatal for children below 10 years of age and people above 50 years of age. In a special conversation with IANS, he said that due to pollution, a large number of people are suffering from respiratory diseases and are reaching private and government hospitals for treatment. He has clearly given three reasons for this, he says that those who are leaving their homes for work in the morning and evening. This increasing pollution is becoming very serious for them. Also read: Weather Update: Relief from cold wave in North India for the next four days, dense fog will remain intact

Along with this, those whose immunity is very low, they are also facing a lot of problems due to pollution. Along with this, people who are already suffering from many diseases are also very upset and pollution seems to be a big reason for them to increase their disease. If we talk about increasing pollution and cold, then this Sati is going to be even more dangerous in the coming days. According to the Meteorological Department, in the coming few days, the cold will increase even more and the mercury will be even more low, after which people will have respiratory problems. have to face.