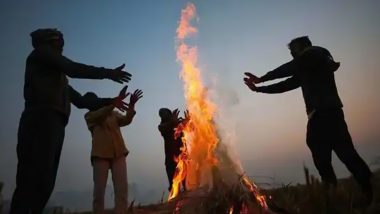 New Delhi, January 19: Most parts of North India got some respite from the cold wave on Thursday and there is no forecast of severe cold for the next five days. The India Meteorological Department (IMD) gave this information. Delhi Weather Update: Outbreak of cold wave stopped in Delhi, chances of drizzle on Thursday night

According to the Meteorological Department, on Thursday, there was an outbreak of cold wave in South Haryana, Eastern Rajasthan, Northern part of Madhya Pradesh and some areas of Bihar.

The IMD said in a statement, “From January 15 to January 18, cold wave to severe cold wave conditions prevailed over northern parts of Rajasthan, Haryana, Punjab, Chandigarh, Delhi, West Uttar Pradesh and Madhya Pradesh. Due to the effect of fresh Western Disturbance from January 19, the cold wave stopped in most parts of these areas.

“There is no cold wave conditions over North India during the next five days,” the statement said.

The department said that under its influence, there is a possibility of light to moderate rain and snowfall in Jammu and Kashmir, Ladakh, Himachal Pradesh and Uttarakhand on January 20 to 22. Rain and snowfall are expected to increase between January 23 and January 26. Light to moderate rain and thundershowers are expected in Punjab, Haryana, Delhi, North Rajasthan and West Uttar Pradesh from January 23 to January 26.