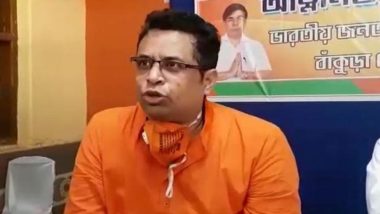 Kolkata: Saumitra Khan, a BJP Lok Sabha member from Bishnupur constituency in West Bengal’s Bankura district, on Thursday called Prime Minister Narendra Modi an incarnation of Swami Vivekananda. Told, after which he is being criticized fiercely. While participating in a program of the party’s youth wing in Bishnupur on Thursday, Khan told media persons – Swamiji has taken rebirth as Prime Minister Narendra Modi. For us, Swamiji is like God. Also, from what the Prime Minister is doing for the country, it can be said that he is the incarnation of Swamiji of New India.

His remarks are being criticized on the occasion of the 161st birth anniversary of philosopher, writer and religious leader Swami Vivekananda. Criticizing Khan, West Bengal’s Municipal Affairs and Urban Development Minister and Mayor of Kolkata Municipal Corporation Firhad Hakim said that Khan has lost his mind. It is very difficult to guess which element it is. PM Modi In Karnataka: The goal is to make India one of the top 3 economies of the world: Prime Minister Narendra Modi

Former CPI(M) Lok Sabha MP, Samik Lahiri said that Khan, who is currently sidelined in his own party, is trying to score numbers through such comments. He can continue his efforts. But who gave him the right to insult Swami Vivekananda in that process?